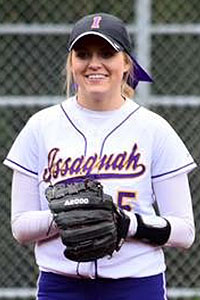 Tatum Dow is a current second year athlete at Bellevue College. She grew up in Issaquah, Washington where she went to Issaquah High School. She played both varsity basketball and varsity softball through her four years. She received 3 All Kingco recognitions as well as 2 Defensive MVP awards.

After graduating from Issaquah in 2016, Tatum played softball at Seattle University, but ultimately decided a better fit for her would be at Bellevue College and transferred there in the Spring of her freshman year.

Tatum is a right-handed hitter and her primary position is short stop, but she has played everywhere in the infield. Tatum has a well-rounded knowledge not only in the fundamentals, but also the game of softball. Playing sports her entire life, Tatum understands the hard work and time management necessary to unlock the full potential of an athlete and works to help young athletes reach their own potential!