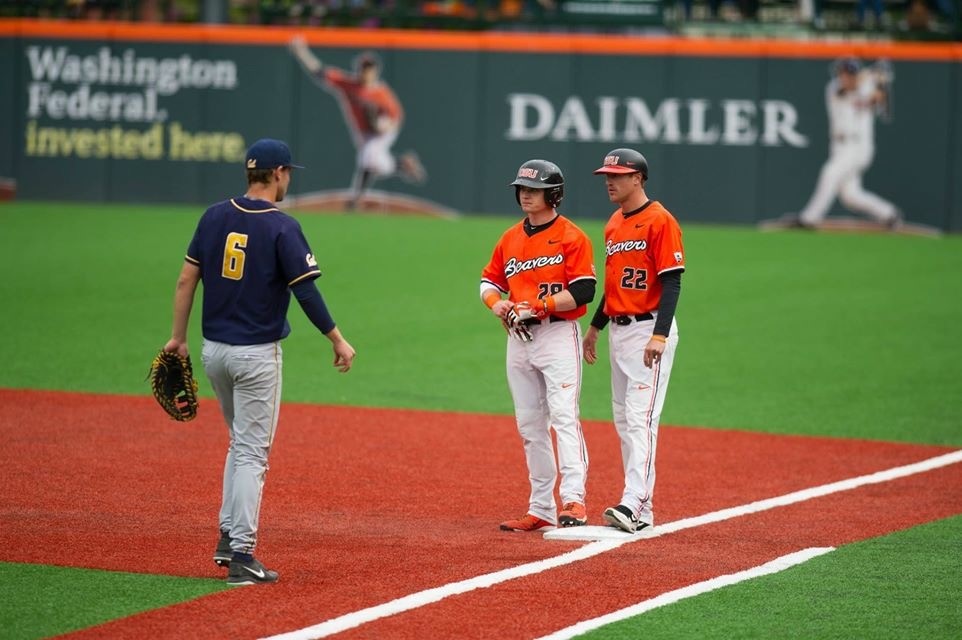 The Importance of Achieving a Flow State

“The most powerful mind is a quiet mind.”

When I was in middle school, I watched the Oregon State Beavers on TV win back to back National Championships. I was 14 years old when my travel ball team had a tournament in Oregon. We stopped by the Nike store where I bought my first Oregon State baseball hat. I was inspired by the program and players on the team. At the time, I had no idea that years later I would be lucky enough to form relationships with some of those players.

One of those players is Tyler Graham (pictured with me on first base). I remember watching him on TV playing for the Beavers in the 2006 National Championship. He was incredible in the outfield, making all kinds of crazy plays, and he played the game all out. The famous call from Mike Parker is something I watched over and over as a kid.

My first year walking on at OSU was when I first met him. He had accepted the position as Director of Player Development. Tyler, originally from Great Falls, Montana, had just finished his professional baseball career. He had just spent the last decade pursuing his dream of playing in the MLB. He eventually accomplished that goal. We would spend the next 4 years together in the Oregon State baseball program.

Tyler is one of the many mentors that poured into me as a player, and truly helped me change my mindset. He was very clear in the amount of extra work it took to be the best at something – not just skillfully or physically, but mentally. He helped me develop an understanding for the process required to be great.

We first started learning about the mental game in our baseball classroom at OSU. Our pitching coach, Nate Yeskie, would guide us through the Brian Cain Peak Performance worksheet and handout. It was then that I truly started to understand the importance of the mental game. I continued to learn and pay attention.

In 2016, on the road at USC was the first time I met Alan Jaeger. When I first heard him talk about the mental game, I was fascinated. He was a mastermind in mental performance. We learned multiple mental skill techniques, including one of the most important, meditation. We went through multiple guided meditations and mental discussions. For the first time in my life, the mental game began to start making sense. Alan Jaeger helped all of us further our understanding. Tyler later became our guide for meditation. This was a crucial piece to our process, success, and lives.

At some point in life, you’ve probably been so concentrated on a task that the skill becomes completely automatic. We lose sense of time and are completely in the moment. In the 1970s, psychologist Mihaly Csikszentmihaly made a great discovery which he. identified as the “Flow State”.  It is described as being “so immersed in a feeling of energized focus, full involvement, and enjoyment in the process of the activity that we lose sense of space and time.” He dedicated much of his life to studying psychology and why people find true happiness in life. His “first studies involved a few hundred ‘experts’: artists, athletes, musicians, chess masters, and surgeons.”

In The Concept of Flow, he gives us the guidelines for reaching it:

As athletes, this is the optimal place we want to be when performing,  but achieving this state is easier said than done. Csikszentmihaly points out, “To experience this state, one has to stay away from the attention robbers common in a modern fast-paced life.” Meaning, that modern society is filled with distractions that take your mind out of the present moment. Athletes must have a self-disciplined mental routine that trains their mind to stay present.

All of us have been told since we were kids that everything starts with the mind. This is, without question, the truth. Baseball is the game of life. We must dominate in our minds if we want to win. The point of the mental game is not to stop our thoughts, but to be aware of them. In being aware of our thoughts we can recognize which thoughts we give our attention to. This skill is trained overtime through a dedicated mental routine.

There were times during my playing career where I achieved flow but had no idea how I was doing it. It wasn’t until later that my understanding of the mental game grew. From there, we must develop a process that we believe in, then have the self-discipline to do it every single day. If you train the skill, body, and mind, you will be prepared. If you train to manage your energy and attention,  you will dominate. There is absolutely no thought, it simply becomes automatic – also known as “Flow”.

Once you become aware, understand why and how those thoughts affect you. Find the source, then redirect focus back to your daily habits and routines. Continue to strive towards mastery in the 3 phases of Mind, Body, and Skill. Over time, with consistent daily practice, these build our confidence and mindset. If enough work is put in, mastery can be achieved where the skills become automatic giving us the best chance to achieve the Flow state.

This process does not guarantee you will reach the Flow state or have success, but for me, it prepared and gave me the best chance to win when my name got called. Without a daily self-disciplined routine, sustained success is nearly impossible.